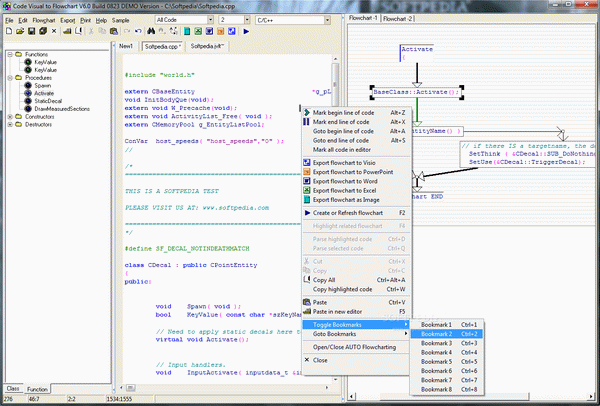 The application features a well-organized interface that displays the code editor and the flowchart side-by-side. The two sections are synchronized, which means that any modification you make in the source code is immediately analyzed and reflected in the generated output. Furthermore, clicking on an item in the chart highlights the correspondent source code section (and viceversa), which assists you in editing complex algorithms.

The generated programming flowcharts include comments and have unlimited expand levels, which means that the maximum depth of displaying the enclosed blocks can be customized. There are two different display modes of the generated flowcharts. The first displays source code fragments in connected blocks, while the second only creates a source code structure sketch.

The result can be exported to Visio or Microsoft Office applications (Word, Excel and PowerPoint) or saved to your computer as images. Additionally, the edited code can be exported to HTML or RTF format or printed directly from the program, while keeping syntax highlighting. The header and the footer can be easily customized.

The program enables you to work with multiple documents and flowcharts simultaneously and quickly switch between them.

Providing support for a variety of programming languages, Code Visual to Flowchart can parse and analyze source code in order to generate graphic code flow charts. It comes in handy for any developer who needs to understand and document their work.