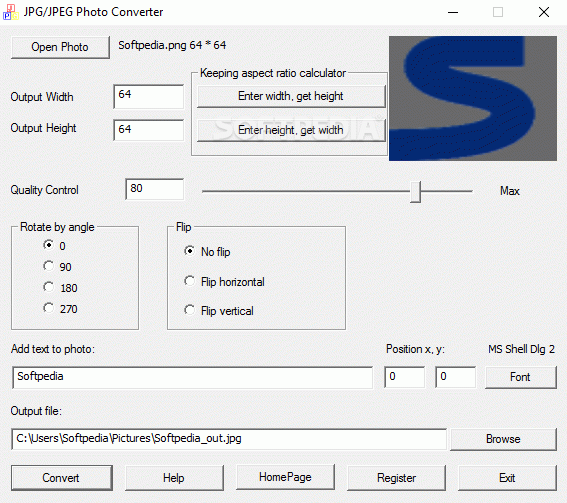 JPG/JPEG Photo Converter is an application that you can use to convert image files of several formats (including BMP, GIF, PNG and ICO) to JPG extension.

The interface of the program is based on a standard window in which you can import a picture via the file browser only, since the "drag and drop" method is not supported (and neither is batch processing).

So, you can preview the picture, resize it by typing its output width and height, adjust the quality control, rotate it by angle or flip it horizontally or vertically.

Additionally, you can add a caption to the photo, set its position and font, as well as specify the output destination and name.

JPG/JPEG Photo Converter takes up a low-to-moderate amount of system resources, includes a step-by-step tutorial with snapshots, supports several interface languages and quickly finishes a conversion task without freezing, crashing or popping up errors. The image is maintained at an excellent quality in the output files.

On the other hand, batch processing is unsupported and that is the biggest downside of the tool. The interface could also use some minor improvements. Also, no message pops up when the encoding is done, to tell you if it was a success or not. Nevertheless, JPG/JPEG Photo Converter  is simple to use by novices and we recommend (with reservations).

You can use this simple and efficient application to create icons or convert existing ones to various formats, such as ICO or ICNS