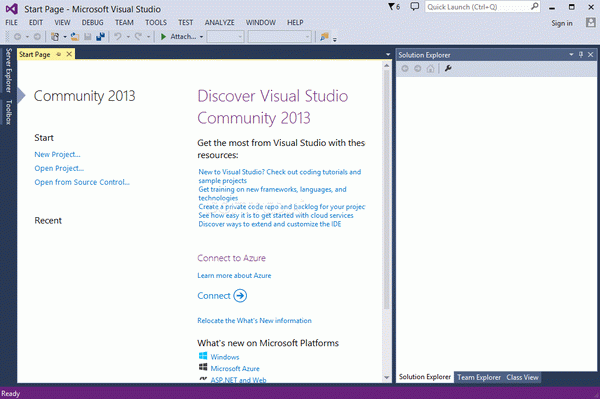 With an advanced source code designer and editor and integrated profiling and debugging tools, Microsoft Visual Studio Community bundles everything one needs to create innovative and fully functional applications for Windows (including modern Store apps), web and mobile platforms, including Android, iOS and Windows Phone.

Programmers can experiment with C++ , AJAX, JavaScript, CSS, ASP.NET, Silverlight and the list of compatible languages does not end here. Its functionality can be extended to support languages such as Python.

It features Azure SDK integration, allowing you to upload your projects to Azure and analyze their performance and efficiency using the Application Insights service. Furthermore, it seamlessly connects to Visual Studio Online, allowing team collaboration and fast feedback.

The integrated Blend visual tool can help programmers design appealing, yet user-friendly interfaces for their apps, while the generous development toolset (emulators, debuggers, simulators) combined with the advanced code editor (with IntelliSense, code completion, syntax highlighting, code inspection and so on) can be used to create powerful apps for all platforms.

Microsoft Visual Studio Community is a full-featured edition of Visual Studio, whose functionality can be extended using plugins in the official gallery, so as to ease the development process.

Thanks to the intuitive IDE, the available code examples and tutorials, programmers can take advantage of the latest web technologies to build great-looking and functional cross-platform apps in a familiar working environment.