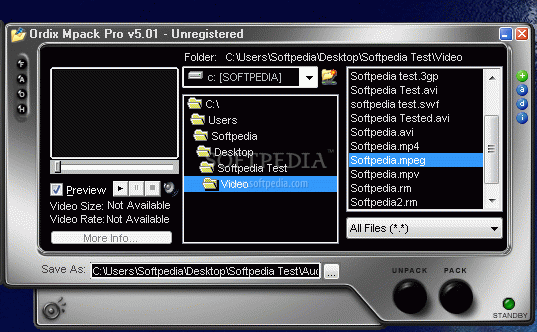 Ordix Mpack is a tool that lets you join and split audio and video files. It only supports MPEG and MP3 files.

Although the user interface seems simple, it is not so easy to navigate through it. The buttons are very small, and you can view Options in a menu (selecting General pops up a window).

In Ordix Mpack, you can pack and unpack files. First you must locate the source folder (drag and drop is not supported), choose the output directory, add files to the pack list, sort them, and pack or unpack them.

If you select a video, you can preview it in a very small window, as well as view its size and rate, but you can obtain more information on duration and total frames.

Ordix Mpack manages to complete a task extremely quickly, no matter if the files in question are big or small. Sometimes it pops up some incompatibility errors, although the output file runs perfectly.

In our case, it happened when trying to merge two MP3 files (you have to disable "MPEG compatibility" from the Options menu), but it also failed to recognize a MPG file. It also pops up incompatibility errors when trying to combine an MP3 and an MPEG, which is normal, but it still gives you the possibility of ignoring the problem, so it can carry out the task (in this case, the output file is obviously unrecognizable by media players).

When you want to unpack files, their output has a floppy-based size by default, but you can change it according to your preferences. Plus, you can select the transfer rate (from slow to ultrafast), create a BAT file, and enable ZIP compression.

In conclusion, Ordix Mpack manages to convert a file very quickly, while using a low amount of system memory. On the other hand, it needs some major improvements in the interface department, but also to support more media formats.

An intuitive and simple-to-use application that helps you split or join RM files, as well as convert them to AVI, MPEG, VCD, SVCD, DVD, or WMV