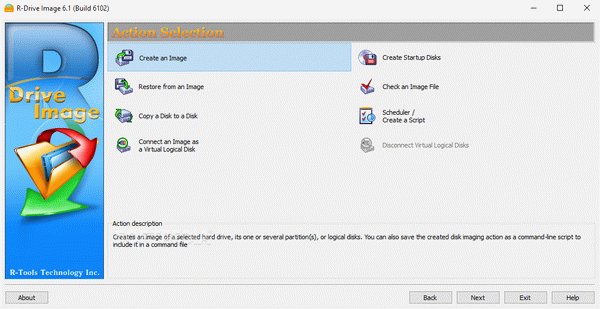 R-Drive Image is a comprehensive application that allows the creation of disk image files for hard drives and partitions. It comes in handy whenever you want to backup or duplicate files.

The interface is based on a wizard-like and user-friendly window, where you can select an action between creating and restoring an image, copying a disk to another one, connecting an image as a virtual logical disk, creating a startup disk, verifying an image file, and creating scripts.

In order to build an image you have to select a partition, saving directory and file name (to R-Drive Image file - RDR format), as well as configure some settings. You can ask R-Drive Image to verify the file's integrity on task completion, adjust the image compression ratio, backup sector by sector or only the actual data, split the image automatically or to a fixed size, as well as set up a password.

It is also possible to enable a snapshot service provided by Windows Volume Snapshot or R-TT Volume Snapshot (or both), establish the backup process priority and total CPU cores to use, assign backup and snapshot auxiliary applications (with support for notifications), as well as ignore disk read errors. Settings can be saved as default for future projects, and the script can be copied to the Clipboard for further scrutiny.

Furthermore, you can create multiple scripts, use backup sets (set size quota, maximum sets, image files and set age), and either create a new full image or append changes to the last image used in the backup set (differentially or incrementally).

R-Drive Image does not take a long time to finish a backup job. Evidently, this depends on the disk size. It uses low CPU and RAM during this time, so it doesn't hog system resources. Overall, R-Drive Image is a pretty good backup and recovery tool, but its features are not as rich as the ones of other similar products, such as Paragon Backup and Recovery.