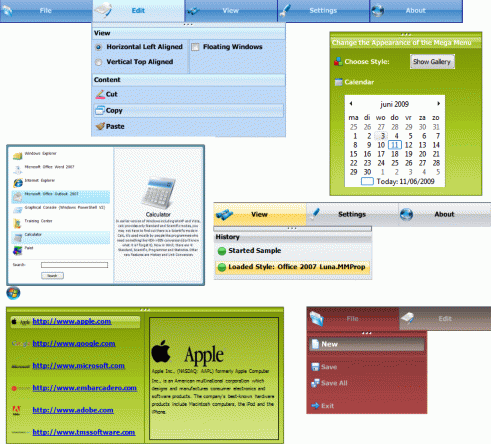 If one of the steps you need to take in order to come up with an outstanding project entails migrating certain functionality from web apps to desktop programs, you are in luck since TAdvSmoothMegaMenu promises just that.

Being offered for download as part of TMS Smooth Controls Pack, the VCL component is specifically designed to lend you a hand when trying to make the most of the so-called Mega Menu concept proposed by the developers as an easy way of adopting various menus along with items in columns, sections, breaks, items, etc..

It is important to point out that, as regards the color settings, the appearance of any Microsoft Office edition ranging from 2003 to 2016 should be covered along with visual cues from Windows Vista, 7, 8, 10, and even the infamous Metro looks is included in the whole affair.

Aside from that, HTML support not only for text formatting but also for top layer or hover items is provided, and making use of embedded controls is an option. In case you are wondering which types of images TAdvSmoothMegaMenu can work with, it should be said that file formats such as JPG, PNG, BMP, and GIF are among them. Last but not least, built-in functionality is provided for radiobutton, edit control, and checkbox.

Add advanced tab control features to your Delphi- and RAD Studio-based applications, such as color customization, using this VCL component